Luther Colby (1814-1894) was the editor of The Banner of Light, a Spiritualist journal headquartered in Boston.  His company, Colby & Rich, also published Spiritualist books and materials.

The correspondence between Joseph Peace Hazard and Luther Colby illuminates the relationship between a true believer in Spiritualism (Hazard) and a professional Spiritualist who sought to benefit from his belief (Colby).  In these letters, Colby often relays messages and advice from Hazard's brother, Thomas Robinson Hazard, who died on March 26, 1886. 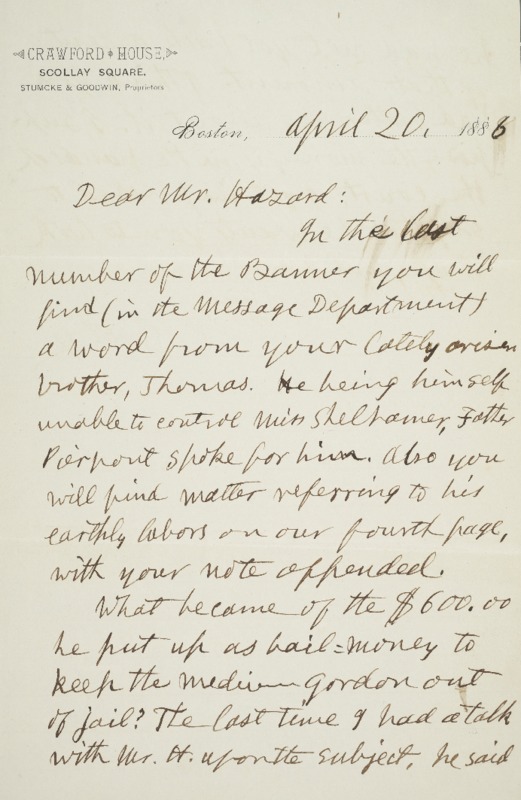 Less than a month after Thomas's death, Joseph Peace Hazard received this letter from Luther Colby, relaying a message from Thomas regarding bail money for a jailed medium:

"What became of the $600.00 he put up as bail money to keep the medium Gordon out of jail?  The last time I had a talk with Mr. H. upon the subject, he said he had not got back a cent of that amount.  I think you had better see about it.  I supposed the money is in the hands of the court.  I get impressed to say that he wants you to look it up; but I may be mistaken." 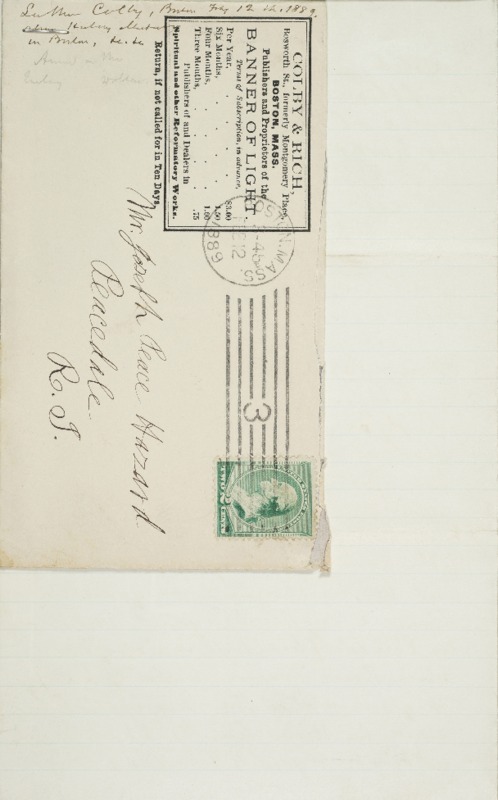 In this letter, Colby recommends healing mediums, one of whom prescribes treatment while being controlled by a "Spirit Doctor" and using a lock of the patient's hair:

"I feel that you will excuse me for not answering your private letter until this late date, when I tell you that I am kept at work day and night in the good cause - and that, too, under adverse circumstances.  I sometimes write editorials at 2 o'clock in the morning!  I have callers at the office so often, whom I must see, of course, that I have no time, or scarcely any, to write in my sanctum.  Needy and sick spiritualists and mediums almost daily implore us for pecuniary aid, orally and by letter."

"I can recommend you to two mediums: Mr. J. A. Shelhamer, who is a grand healer, and who has his sister to consult with, who is controlled by Spirit Dr. Warren.  You had better send a lock of hair ot him if you need medical treatment.  Then Mrs. B.F. Smith, (who holds circles at our office Fridays), prescribes for the sick at anytime except Fridays.  I heard her doctor tell a lady last week what ailed her husband, and prescribed, without a lock of hair.  The lady was an entire stranger to the medium." 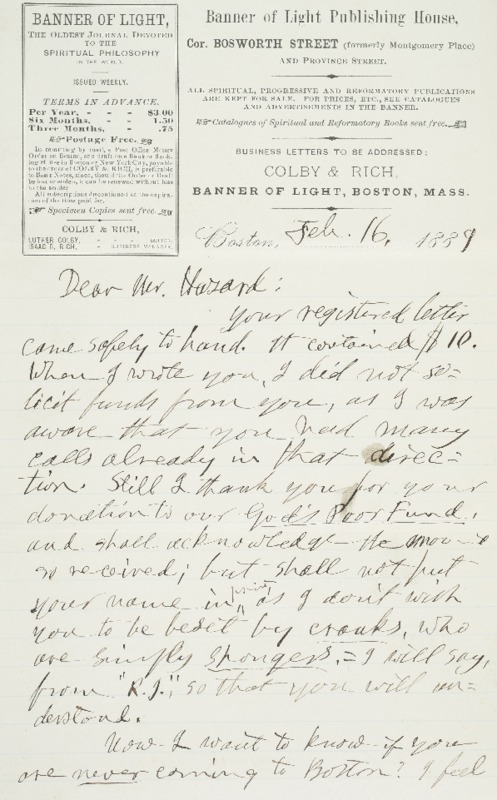 In this letter, Colby explains that Thomas wishes to communicate through one of Colby's mediums in a private sitting.  He also describes a spiritual painting by Miss Diss Debar, a popular medium who was later described by Houdini in his 1924 book A Magician Among the Spirits as "one of the most extraordinary fake mediums and mystery swindlers the world has ever known":

"Now I want to know if you are never coming to Boston?  I feel to say this morning that your Brother Thomas, now a resident of the Spirit World, would like to communicate privately with you through - (he is confident that he can) - our new medium, Mrs. Smith, who sits at our office every Friday at 3 o'clock.  If you should feel disposed to have a private sitting with the lady, I can arrange for you to do so any Friday at 4 o'clock - after the close of the public circle.

"I wrote to you some time ago that I had a portrait, made in five minutes at onset through the agency of Mrs. Diss Debar, which I think very much resembles the Hazard Family."

In this letter, Colby responds to Hazard's request for information about Mrs. Hull, a medium who had previously held private sittings in Boston.  In the postscript, Colby describes the trouble with drunk mediums:

"P.S. - The grand medium, Dr. Slade, I hear, is in Maine at the present time, drunk.  What a pity it is that our psychics, after - like an unruly cow - giving plenty of milk, then kick the pail over! Mrs. Sawyer is another kicker.  We must drop such mediums, don't you think so?" 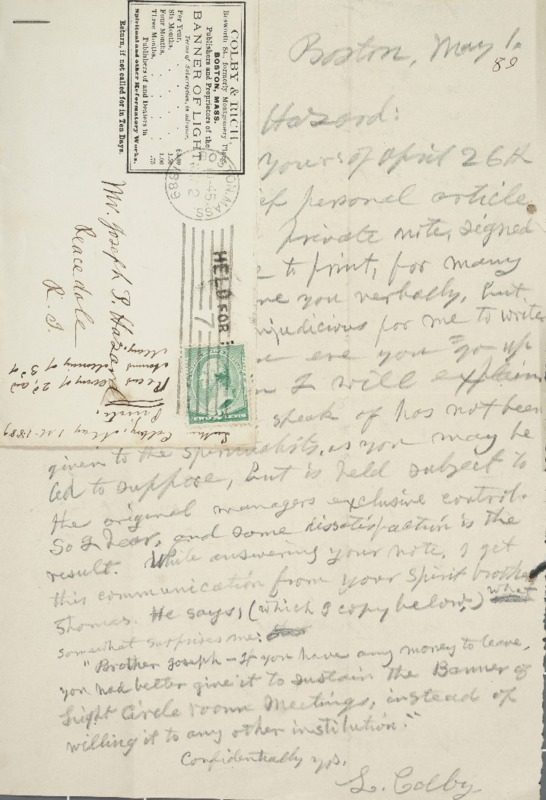 "While answering your note, I get this communication from your Spirit brother Thomas.  He says, (which I copy below), what somewhat surprises me:

" 'Brother Joseph - If you have any money to leave, you had better give it to sustain the Banner of Light Circle room meetings, instead of willing it to any other institution.' " 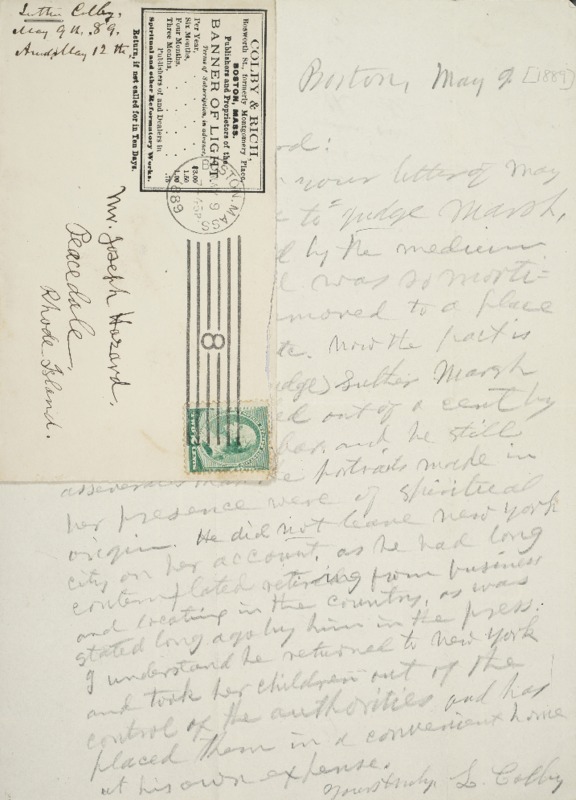 In this letter, Colby refutes claims of Madame Diss Debar's "swindling", and adds a postscript conveying Thomas's annoyance at the "persecution and prosecution" of mediums:

"In your letter of May 2d you allude to Judge Marsh, who was swindled by the medium Miss Debar, and was so mortified that he removed to a place near Buffalo, etc.  Now the fact is that Lawyer (not Judge) Luther Marsh was not swindled out of a cent by Madame Diss Debar, and he still asseverates that the portraits made in her presence were of Spiritual origin.  He did not leave New York City on her account, as he had long contemplated retiring from business and locating in the country, as was stated long ago by him in the press.  I understand he returned to New York and took her children out of the control of authorities and has placed them in a convenient home at his own expense."

"Whenever your ascended brother Thomas reports, I will send you whatever he communicates.  He is somewhat annoyed just now because of the persecution and prosecution our mediums are receiving, and he is just as earnest in protecting them as he was when here in bodily form." 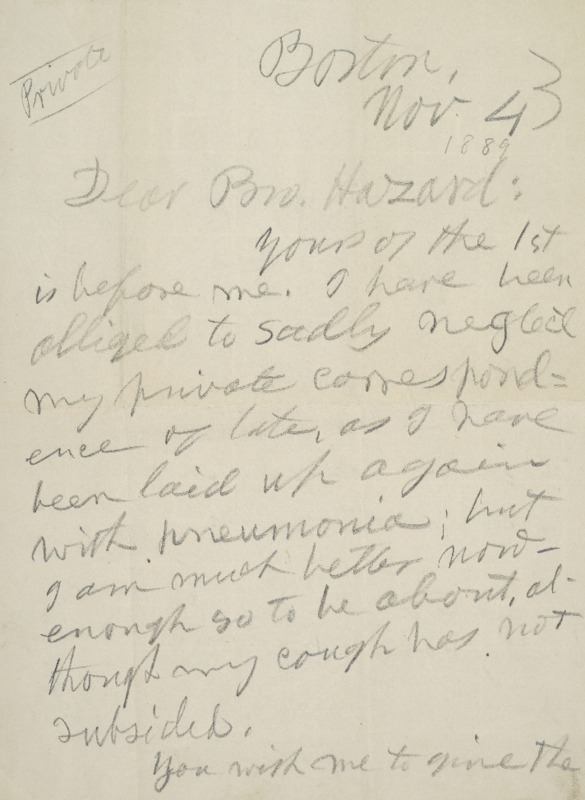 In this letter, Colby describes the battle within Spiritualism, as mediums fall by the wayside and/or disavow "the Cause":

"We are being kicked, as usual, by Spiritualists, who want to boss us, but can't - as well as by enemies of the Cause.  I am getting tired of this sort of life.  Do you wonder?

"I am always pleased to hear from you.  Thomas R. comes to see us occassionally.  He is, he says, more wide awake than ever before."