This exhibit showcases the travels letters of Joseph Peace Hazard (1807-1892), a wealthy Rhode Islander who traveled extensively throughout the world in the mid-19th century. Hazard wrote home to his sisters in Rhode Island, later adding his brother Isaac as a recipient. His letters include comprehensive descriptions of his activities and the sights of his various destinations; he recounted social calls, the local architecture, the everyday life of the people, and in particular, observations about the natural world. He keenly documented the the environment around him, listing (and sometimes waxing poetic) about the plant life, animals, and geographic features.

In the Victorian era, travel writing became popular as advancements in transportation allowed greater freedom of movement for the middle- and upper-classes (O’Cinneide, 2012); for example, Hazard often traveled by steamship across the ocean or down rivers on his journeys. A growing public interest in subjects such as natural sciences and anthropology encouraged travelers to document their examinations of new locales (O’Cinneide, 2012). Both professional writers and amateurs who traveled for business or pleasure inscribed travelogues for publication or personal record (O’Cinneide, 2012). Hazard took care to preserve his letters, though his motivation for doing so is unclear; they appear to have been kept within the family.

The exhibit title, “Things of Beauty,” originates from Hazard’s impression of the flora of Brazil in Letter No. 2 (Series 2) (“Roses in full bloom, bananas pomegranates orange and fifty other tropical things of beauty") and characterizes his love and awe of the natural world. The exhibit is divided into three main themes of Hazard’s observations of nature: Flora, Fauna, and Geography. The "Things of Beauty" button at the top of the page can be used to navigate through the major sections of the exhibit. 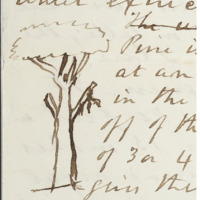 The exhibit includes letters selected from two “series” of Hazard’s travel correspondence. The first series comprises letters from a trip with stops in Europe, Northern Eurasia, the Middle East and North Africa during the late 1850s to early 1860s while the second series comprises letters from a trip to Brazil, with stops in the Caribbean and Argentina from 1866 to 1867. The interactive map toward the end of the exhibit displays 71 different locations mentioned in the 24 letters digitized for this project.

Hazard's papers are part of the Nathaniel Terry Bacon collection, held by the Special Collections department of Adams Library, Rhode Island College.  The digitized documents from this exhibit also may be viewed online at DigitalCommons@RIC.